Jack Krauser, also known by his SOCOM codename, Silverdax, is a supporting antagonist from the video game Resident Evil 4. He made his debut in The Ties That Bind, though his first chronological appearance was in Genesis.

A former American soldier who worked under the organization SOCOM, Krauser defected and began working under Albert Wesker.

At some point before the events of the series, he began working for Umbrella, primarily under Albert Wesker.

He has a somewhat brief role within the event, appearing more prominently in the prologue explaining to the Survivors the situation that they were in and telling them to aid them in their fight against S.H.I.E.L.D., or die, in the prologue. He takes the group to the battlefield to fight against some of the Avengers, and when a number of them refuse, he kills Travis Touchdown, first by paralyzing him via the device implanted inside his head, then by blowing him up with a rocket launcher. He threatens the rest of the group in order to try and coerce them, before taking his leave in the wake of the Avengers winning the battle.

With the Avengers defeating the group and taking them into S.H.I.E.L.D., the devices were disabled and Umbrella was unable to kill them all as a failsafe method.

Krauser appeared briefly near the end of the event and was implied to be working with Nemesis and Albert Wesker, which meant his allegiance to Umbrella, who Wesker had been manipulating, was unknown.

The Ties That Bind Edit

He initially had minimal involvement within the game, merely acting as Wesker's aide at first. However, when the climactic battle occurred on Celebrity Island, he would strike, stabbing and killing Dandy.

After a lengthy, violent knife fight with Shiki Tohno, even despite a monstrous transformation that greatly enhanced his strength, endurance, and speed, the soldier met his timely end, and thus, Dandy was fittingly avenged.

Before the Sickness Edit

Believed to be dead for quite some time, it is eventually revealed that Krauser had been replicated by Albert Wesker and Mom Lalonde. Due to a fault in the replication process, Krauser was left without memories of the previous events.

With his memory compromised, Krauser believed he was only now beginning to work for Umbrella. In exchange for having his arm fixed, Krauser agreed to do whatever Wesker asked of him. Wesker told him of a second Nemesis T-Type being worked on by a scientist known as Lalonde and that Leon Kennedy was on his way to the laboratory where the Nemesis project was being housed. Krauser was told to intercept Leon and assassinate him, which he quickly accepted.

At the laboratory, Krauser and Leon scuffled, their fight eventually being taken into the room storing Nemesis. The creature was remotely activated and it quickly ascertained Leon as a threat. Nemesis overpowered Leon and killed him before turning on Krauser. Revealing a remote with the power to control Nemesis, Krauser used it to bring the bioweapon under his control.

Some point after bringing the Nemesis T-Type under his control and assassinating Leon Kennedy, Krauser ends up working alongside Umbrella scientist, Mom Lalonde, for a time. After having Lalonde fix his arm in exchange for his service to Umbrella, the two parted ways.

Just before the event, Krauser is seen along with Nemesis about to kill an incarnation of Jill Valentine. Whether it is the same Jill Valentine from the previous Murder Events is left unknown and ambiguous, but either way, before the deed could be done, he and the monster were sent into an unfamiliar world.

Krauser had a notable amount of involvement within the event, his gruff, violent, and blunt nature bouncing well off the other participants, including the meek Noel Vermilion and brash Joseph Joestar. For the most part, he stuck by his ally, Mom Lalonde, who had connections to the Umbrella organization.

Krauser, alongside Nemesis, appeared during the second half of the event, rescuing the survivors from a group of zombies. Krauser had managed to survive Cole MacGrath's assault on the Aether Facility and had decided to stick alongside the survivors until they found a way out. He, along with Nemesis, eventually escaped through a portal together.

It is unknown where the pair ended up, but they eventually made it back to Umbrella.

He physically only appears within the fourth chapter, having taken over the Coalition HQ along with the forces of Umbrella over the course of the event while the majority of the Coalition members present underwent a mass hallucination causing them to believe they were in Silent Earth.

Krauser is seen holding a number of members hostage, including Spider-Gwen, Byakuya Togami, and others, before quickly being defeated and killed in battle shortly after the other members, freed from their hallucination, broke free and appeared to stop him.

The Ties That Bind Edit

As mentioned above, he is killed by Shiki Tohno in the climactic fight of the Murder Game. Little is it known though that Krauser would not remain dead, his consciousness going over into another "cloned" body to live again.

It is generally believed that he had left the world of the sickness via the same means that everyone else had, presumably alongside Mom Lalonde.

It is sometime during this period that he eventually ended up in the Aether Facility.

Krauser as he normally appeared. 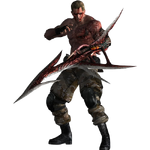 Krauser with the mutated arm-blade.
Add a photo to this gallery

Retrieved from "https://convergence-series.fandom.com/wiki/Jack_Krauser?oldid=23038"
Community content is available under CC-BY-SA unless otherwise noted.